Shipshape Travelers: Cruising the World for Less With AAA Dollars

If you ask AAA Members Michael and Ellen Lorber to count off the countries they’ve visited, you might want to make yourself comfortable first. The list will take some time.

Since the Lorbers connected with AAA Travel Advisor Mark Burks 11 years ago, they’ve visited about 75 countries—many, more than once.

The Lorbers credit Burks with switching them to the AAA Dollars Plus Mastercard, a card that lets them earn AAA Dollars, which they apply toward cruises through AAA. Michael estimates that by using this Mastercard for all of their purchases, they’ve earned AAA Dollars vouchers totaling about $35,000, which they use to help fund their travel.

Michael, a retired university professor, and his wife, Ellen, a semiretired schoolteacher, live in Normal, Illinois, and have been AAA Members since 1968. They’ve traveled together throughout their marriage.

“She likes to travel; I like to be with her,” Michael says.
“So it works out well.”

“As a kid I was always very interested in the world,” Ellen says. “When I was in eighth grade, the teacher got a postcard with a picture of the Colosseum. I looked at it and I thought, ‘Someday I want to go there.’” Ellen took college classes in art history and dreamed about seeing those places for real. And that’s what they’ve done.

Although they have taken some guided trips on land, they prefer cruises—usually about four weeks long. They enjoy reading outside on their veranda while cruising.

“We’ve tried to see as much of the world as we could,” Michael says. When their son lived at home, they took him to all 50 states and Europe. Now their travel focuses mostly on cruises to northern climates.

“I don’t want to go anyplace it’s hot, because I don’t like hot weather,” Michael says. “But beyond that, we’re pretty flexible.”

Ellen has a doll from every country they’ve visited—a sizable collection that has Michael wishing for more wall space at home. She has also become an expert packer. When they were in Italy, Ellen spotted a beautiful inlaid table and remarked how nice it looked. “Well, if she says that’s really nice, that means I’m going to get it for her,” Michael says. He took it apart and Ellen squeezed it into their suitcase.

For his part, Michael has come back with stories, like when they were in Nepal for his birthday and Ellen arranged to have an elephant deliver his birthday cake.

And then there’s the story about the curious Komodo dragons. Michael was taking pictures of the giant lizards when suddenly their guide stepped in front of him. “Apparently, I had draped something over my arm that was swinging when I was trying to take the pictures,” he says. “It attracted the attention of the Komodo dragons, so they were coming for me.”

Their next cruise is a “little” one to Hawaii—just two or three weeks. The longest cruise they’ve taken was seven weeks. They plan their cruises a year or two out, but when they used to take road trips, they could be spontaneous.

Once, they were driving across the United States and had gotten as far as Arizona when Michael asked, “Where would you like to go?” “Take a right,” Ellen replied. “The next thing I knew,” Michael says, “we were in Jasper [Alberta], Canada.”

“Every day with her is a different adventure,” he says. “If we go out of state, I take our passports. I never know with her.”

AAA Travel Advisors can help you book your next adventure. 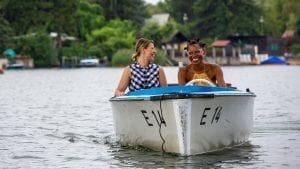 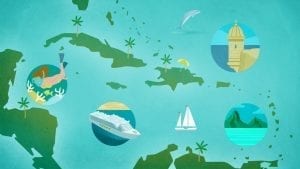 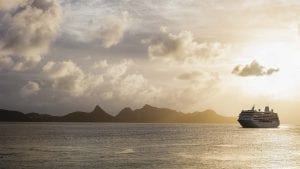