Travel to Canada: 3 Ways to Explore Its Beauty

Is Canada keeping itself a secret? What else could explain why more of the world isn’t flocking there for vacation? This is a country with serious riches: bold cities, distinct cultures—even (arguably) the most impressive stretch of the Rocky Mountains.

If you’re ready to visit the world’s second-largest country by total area (only Russia covers more ground), read on. We break it down for you by mode of travel in our choose-your-adventure overview.

You can’t help but hear the call of the open road in Canada. With nearly 650,000 miles of byways and highways winding across mountain ranges, vast plains, ocean coasts and more, this country is a memorable road trip waiting to happen.

You can rent a car and explore at your own pace or take an escorted trip and enjoy the sights without being the one behind the wheel. (This is a particularly good way to explore several standout cities, such as Montreal, Quebec City and Toronto, in a single visit.) Either way, you’ll find Canada’s sigh-inducing scenery delivers.

Niagara Falls, for instance, doesn’t merely beckon—it roars. The falls, which straddle the U.S.-Canadian border, are about a two-hour drive from Toronto. Those in the know agree that the most awe-inspiring views await on the Canadian side, which offers a wide panorama of all three cascades that make up Niagara Falls. You can sample views from both sides of the border by walking across the Rainbow Bridge. (Just remember to bring your passport.) And now, a new view is possible—a bird’s-eye look from the zip line that sends riders soaring at speeds of more than 40 mph along the edge of the gorge. But to really feel the falls’ power, hop on one of the seasonal boat tours that take you up-close to the vast curtains of water. Despite the provided ponchos, you will get wet from the spray.

Elsewhere when you travel to Canada, you’ll experience scenic drives that rank among the world’s best. The Cabot Trail in Nova Scotia, on Canada’s east coast, is a 185-mile loop that travels through picturesque fishing villages and clings to steep oceanside cliffs—allowing you to drink in the views over the Atlantic. And in western Canada, the Icefields Parkway is one of the world’s grandest mountain routes, running through Banff and Jasper national parks. The views of the Rockies are stunning; along the way, be sure to stop at the Columbia Icefield and powerful Athabasca Falls, where the constant churn of whitewater is rendered all the more impressive by the pristine alpine surroundings. 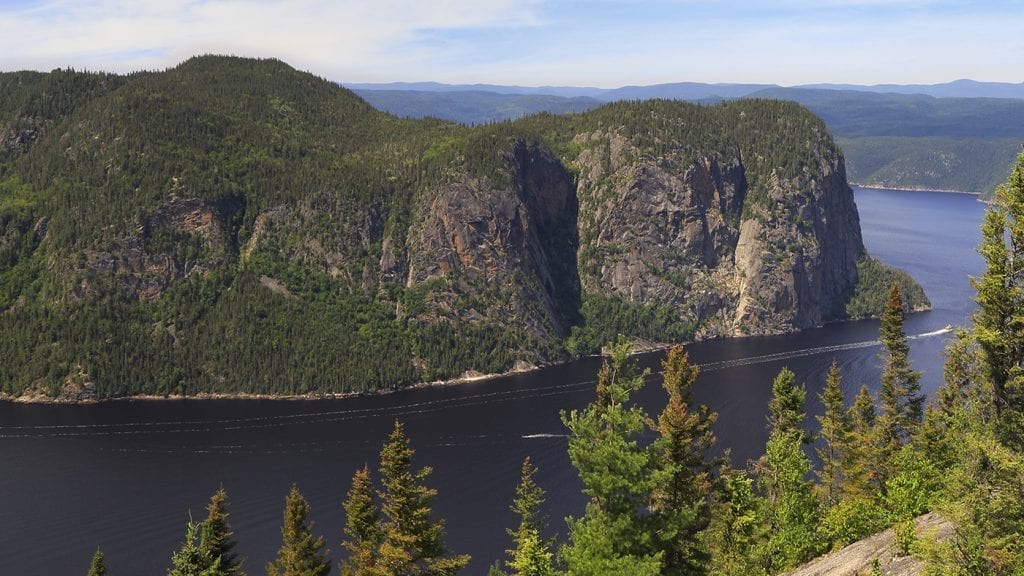 Rocks of Ages: Believed to be made up of some of the oldest rocks on Earth (over 540 million years old), the slopes of Quebec’s Saguenay Fjord were carved by glaciers and offer breathtaking views of crystal-clear lakes and forests brimming with cedar and fir trees. The ancient rocks are part of the Canadian Shield, which encircles Hudson Bay. iStock 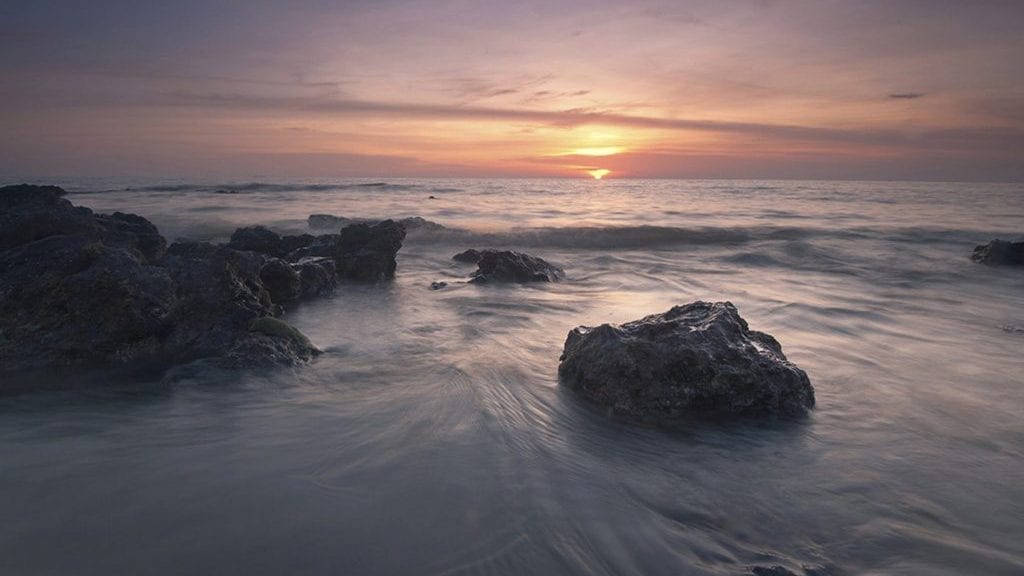 The Tide Is High: Each day, a billion tons of water flow in and out of Nova Scotia’s Bay of Fundy, creating the highest tides in the world—over 50 feet in some places. The bay’s tides are augmented by a natural rocking motion, similar to the movement of water in a bathtub. To experience it, visit at high tide and then come back about six hours later to see low tide. iStock 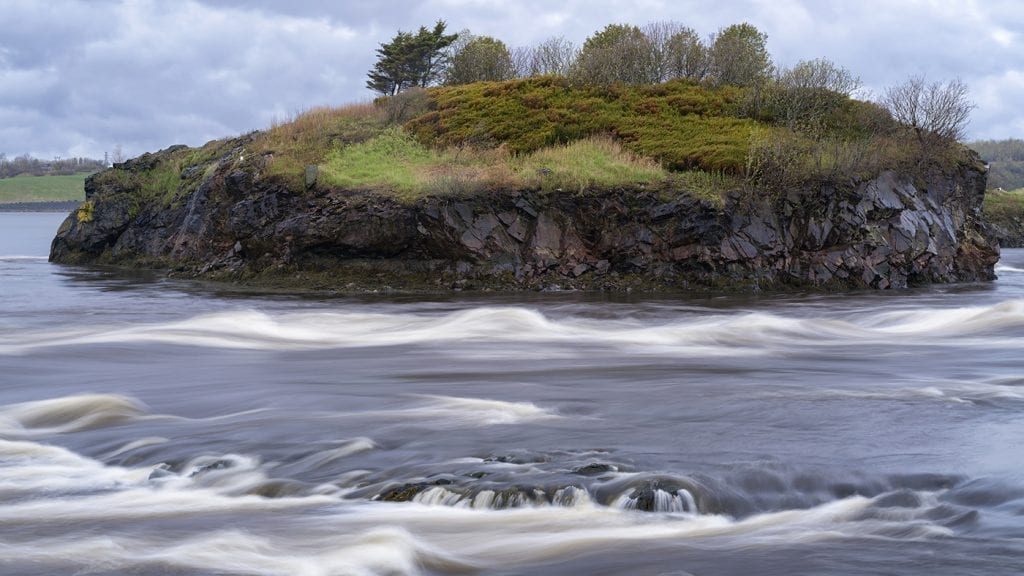 Reversing Waters: Where the Bay of Fundy and the Saint John River meet, the river actually reverses its course (seriously!). At low tide, the river empties into the bay in a series of rapids and whirlpools. But as the tide rises, the force of the water actually reverses the flow of the river for a time, with the peak at high tide. iStock

Some things are best enjoyed on the water, and one example is surely the fall colors of Canada’s eastern coastline. Imagine relaxing on deck (or on your cabin’s private balcony) as the multihued landscapes unfold.

See what AAA Members are saying about their cruises—to Canada and around the world.

A week-long cruise typically starts or ends in New York or Boston, while longer cruises—12 days or more—often use Fort Lauderdale, Florida, or Charleston, South Carolina, as a terminus. Either way, as you wind your way along Canada’s coast, panoramas of reds, golds and yellows sparkle in the sunlight, punctuated by quaint fishing harbors and culture-rich coastal cities.

The ocean portion of the cruise will take you to the three Maritime Provinces: Nova Scotia, New Brunswick and Prince Edward Island. This trio serves up some of the nation’s prettiest small towns—along with world-renowned seafood. Try the sweet, tender mussels on Prince Edward Island; its ocean climate and tidal patterns are uniquely favorable to this delectable shellfish.

Your journey then heads inland to sail along the St. Lawrence Seaway, where more fall color awaits. The boreal forest on the river’s north shore is a mix of coniferous trees—firs and pines—and deciduous trees, those that change color. Their warm hues pop against the green canvas of conifers, creating a distinctive mosaic. On the south shore, the forest teems with red maples, yellow birch, white ash and others. The only sights that might steal your attention from nature are the 40 lighthouses that line the waterway in and around Quebec.

The St. Lawrence Seaway cruise also takes you to some of Canada’s most impressive cities. Montreal hums with a global vibe, while Quebec City—founded before the Pilgrims landed at Plymouth Rock—charms with its 17th- and 18th-century stone architecture and European feel.

Other cruise options include a tour around the Great Lakes, sailing between Chicago and Toronto, with a day spent in Niagara Falls. Or you can explore Canada’s west coast from Vancouver in the summer. A popular stop is Vancouver Island, with its glorious 55-acre Butchart Gardens, and many journeys wind their way through Canada’s rugged Inside Passage, past pine-covered fjords, peaceful inlets and adorable harbor seals. 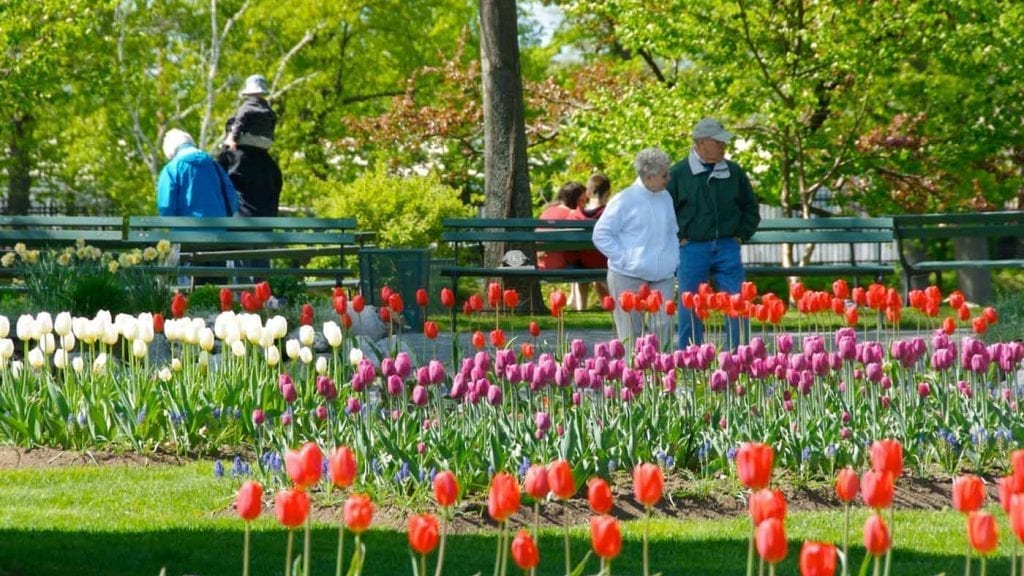 Halifax: In summer, the Halifax Public Gardens blossom into a riot of color. Among the oldest surviving examples of Victorian gardens in North America, these well-manicured grounds offer a great way to kick off your visit to Nova Scotia’s capital city. From the centrally located gardens, make your way to Citadel Hill, where sunbathers and kite flyers hold court, before heading indoors to learn about local nautical history at the Maritime Museum of the Atlantic. Wally Hayes/Nova Scotia Tourism 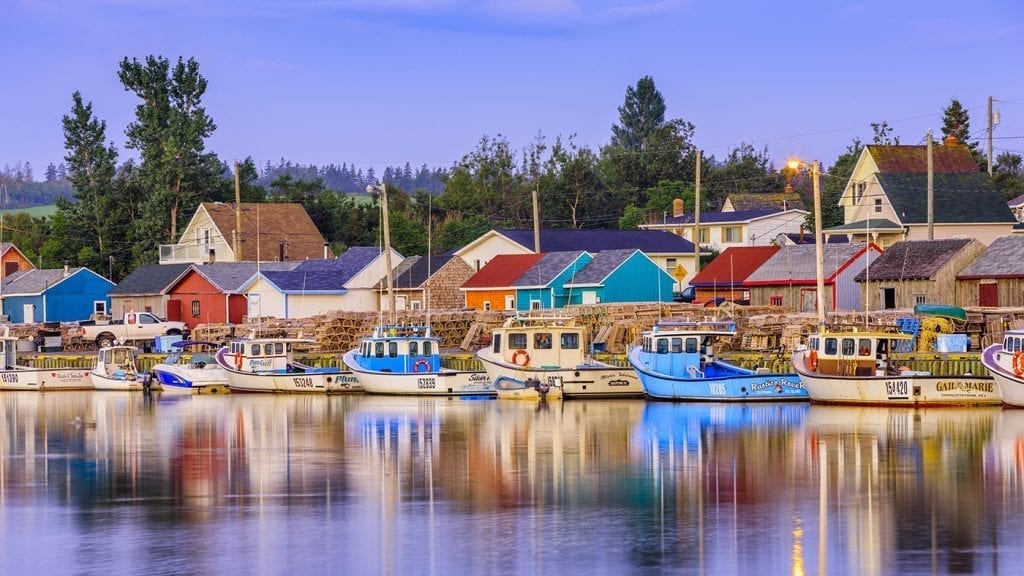 Prince Edward Island: When L.M. Montgomery wrote her first novel in 1908, she had no idea what a worldwide sensation Anne of Green Gables would become or how the spunky redheaded girl it featured would take on a life of her own. See the setting that inspired the tale when you tour Green Gables Heritage Place in Prince Edward Island National Park or stroll among the trees at the Sunnybrook Farm Estate Winery (the wines pair nicely with Prince Edward Island’s famous seafood export, mussels). iStock 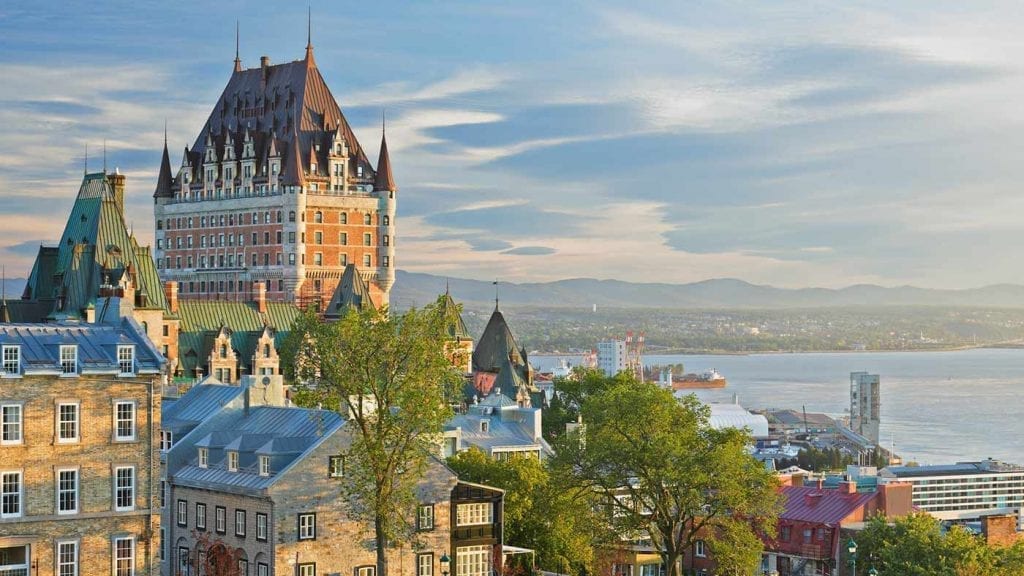 Quebec City: Split by the St. Lawrence River, Quebec City is a delightful combination of modern metropolis and Old-World charm. After a guided tour of the AAA Four Diamond Fairmont Le Chateau Frontenac—a hotel so striking that Alfred Hitchcock used it in the opening scene of his film I Confess—take a leisurely promenade along the Terrasse Dufferin. And don’t leave without trying poutine—a uniquely French-Canadian dish of French fries, cheese curds and gravy. iStock 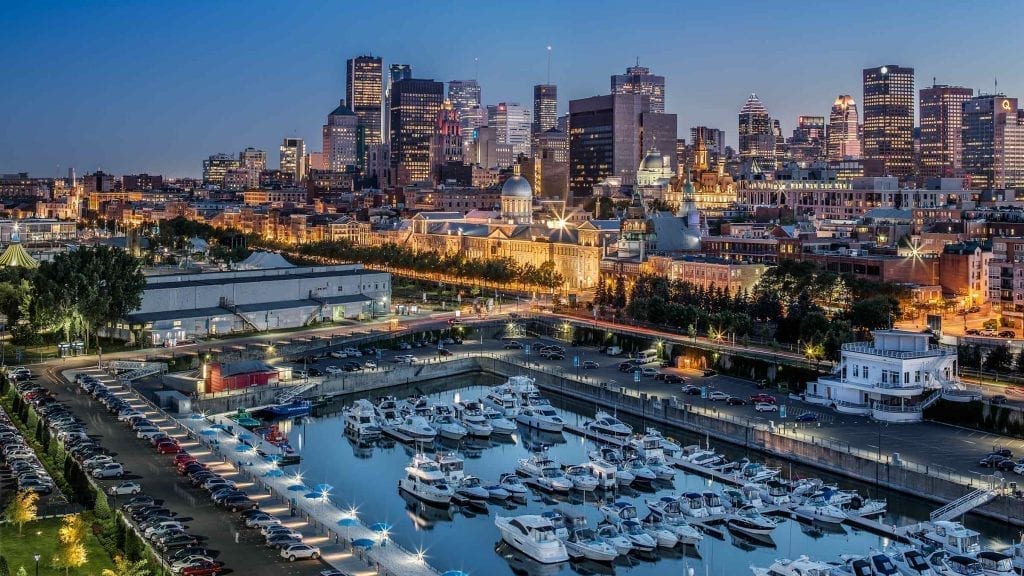 Montreal: The European flavor of this Canadian city is evident everywhere, from the corner cafes to the graceful rise of the Notre-Dame Basilica with its Gothic revival towers. (Take a tour or book a ticket to an organ recital.) Leave time to explore Centre-Ville—downtown—where skyscrapers abut heritage buildings. The highly walkable streets are welcoming to pedestrians, which means you’ll save on cab fare (and burn off the calories from the city’s renowned bagels). Tourisme Montreal/Stephan Poulin 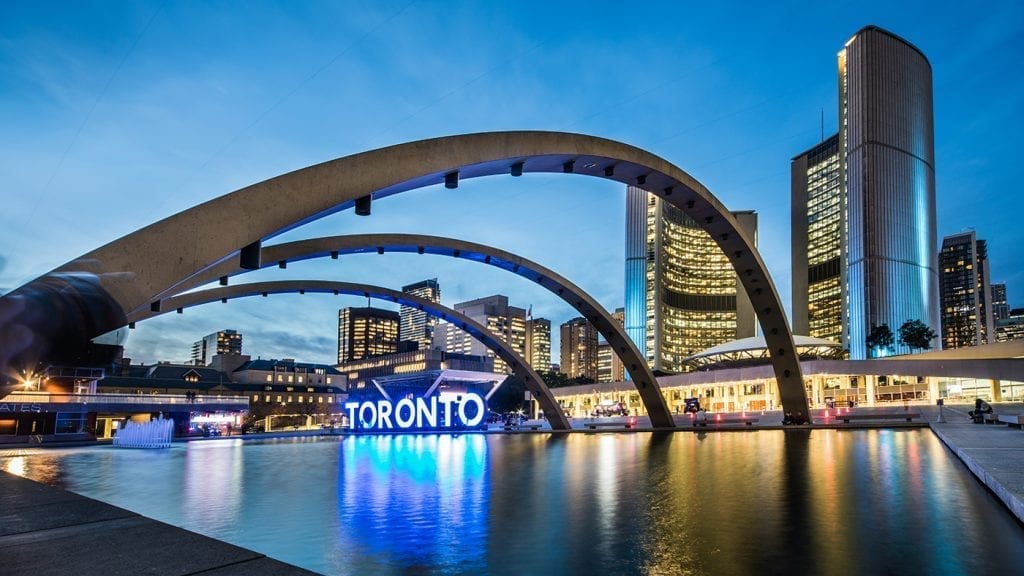 Toronto: Canada’s biggest city—and one of its most diverse—boasts entire neighborhoods devoted to Indian, Chinese, Italian, Greek, Polish, Korean and other distinct cultures. Head up the 1,815-foot CN Tower for soaring 360-degree views, and it all melts into one glorious megametropolis. After all, adrenaline has a way of bringing everyone together; just ask the visitors who take the optional excursion along the tower’s exterior walkway, said to be the world’s highest full-circle, hands-free amble. iStock

Rail travel is a particularly pleasurable way to see vast stretches of natural beauty. Canada’s trains venture where roads can’t, revealing wonders such as breathtaking Pyramid Creek Falls and the multihued rock of Painted Bluffs. Neither of these British Columbia gems is accessible by road, yet they’re easy to see via a rail trip. You’ll pass so close to the falls, in fact, that you’ll feel the cool spray on your face as you stand in your train’s open-air vestibule.

The national train system has routes of varying lengths, including a four-night cross-country trip between Vancouver and Toronto. These longer-distance trains feature dining cars serving up Canadian cuisine on elegant china and sleeper cabins where you can drift off to the rhythm of the wheels as they glide overland. Luxury berths even include a minibar and TV. But why watch a screen when the real action is unfolding just outside your window?

Find out how you can get up to C$200 in merchandise credit per adult when you travel on Rocky Mountaineer.

Another train, the Rocky Mountaineer—one of AAA’s preferred travel partners—operates three scenic routes in western Canada—showing off the best of British Columbia and the Canadian Rockies in Alberta. Glass-domed coaches frame panoramic views, while locally inspired cuisine, such as salmon from British Columbia’s Fraser River, is served up in the dining room or at your seat, depending on what level of service you’ve purchased. Engaging guides in each car point out highlights and historical sites, and their eagle eyes frequently spot bears ambling alongside the tracks or on nearby ridges. (The train slows down, when possible, for such photo ops.)

One distinction of the Rocky Mountaineer is that it rests at night. Passengers disembark in towns such as mountain-chic Banff or quirky Kamloops—so there’s plenty of time to shop, enjoy dinner and sink into bed in a waiting hotel room. Because there’s no travel at night, you don’t miss a single moment of scenic splendor. 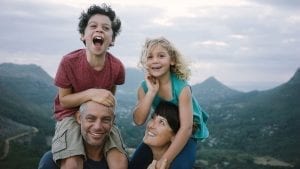 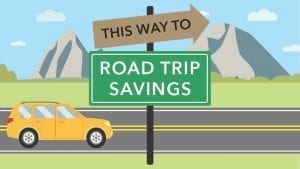 Road Trip Tips: How to Save on Your Next Getaway 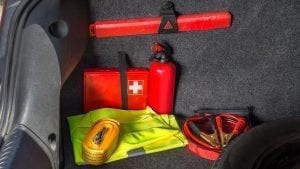